Get to Know Brea Star the Fashion Stylist 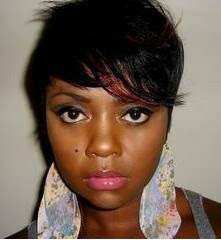 I am always interested in following fashion stylists since I am in the field and I LOVE to see how others got into this profession. I first found out about Brea Star after a publicist sent me info about the online reality competition called Concrete & Cashmere. This contest was between stylists who were competing to be the final stylist standing that would design the uniform for the Alize brand. The entire time I was rooting for Brea Star, who ended up WINNING! Then, I sent out a tweet asking who styles Keri Hilson and once again Brea Star's name was out there so I decided that everyone needed to k now about Brea Star since she had caught my attention:) Stay tuned this year for Brea Stinson's first line (BSTAR) this year (2010).
Brea Stinson, the fashion stylist and designer:
Brea began as a High School student in Detroit creating looks (by styling and designing) for her friends attending homecoming and prom. During her time at college at Clark Atlanta University friends kept wanting the looks Brea was putting together, so she came up with a line called, BStar that included signature tees and customized denim.
After college, Brea moved to New York City and assisted stylists like PATRICIA FIELDS--working on a few episodes of SATC (what a DREAM!) and Tameka Foster (who styles celebs like Toni Braxton and Lauryn Hill.) From working with Tameka, Brea began to hone her skills as a stylist and develop her niche for custom designing. (Assisting and interning for established stylists not only teaches you how to style, but also allows you to meet potential future clients.)
Here is a look into Brea Star's established career:
"In 2004, I branched off on my own. I worked with Usher on The Truth tour for the 10x platinum album "Confessions" doing costume design and wardrobe. I also scored my first magazine cover as an independent stylist with him for America magazine later known as Giant. I worked with Ginuwine, Jay-Z, Rob Thomas and a host of athletes.
In 2006, I signed with Balan Inc., since my signing with the agency--I've worked with Labron James, Keri Hilson, Mims, Raheem Devaughn, Letoya Luckett, Electrik Red, Lauren London, Usher, Claude Kelly, Jay-Z, Dwayne Wade, Dwight Howard etc.
I've done commercial ads for Reebok, State Farm, and t-mobile.
I've done editorial covers for xxl, vibe, essence, rap-up, sister to sister, and fader.
I've also began to get into image consulting and art direction with the help of my agency. I have a keen sense of trend and style--we are now developing ways for me to not only capitalize off of it, but to assist record companies and management with artist development and growth structuring. (As you can see, Brea did a lot on her own, but having an agency really gets a variety of jobs for a new stylist to work on.)
Tips:
I suggest that fashion enthusiast who wish to become stylist: ASSIST, ASSIST--hands on experience is definitely needed and mandatory in becoming a strong stylist.
I get a lot of random emails etc-I mostly hire assistants and interns by referral, but I'm open to those that are sincere and really ready to put in the work.
My strong points in styling---being a trendsetter and testing the limits. I often design one of a kind pieces for my clients and it gives them a sense of uniqueness and individuality and that's what being a star is all about!
My favorite magazines for inspiration are Nylon, Elle and British Vogue. I am also an avid people watcher. I get inspiration from the strangest places! i.e., history, nature, the homeless--I'm all in!
For more info:
Brea's Portfolio
Brea's agency page
The BSTAR tee's
Brea's Blog, I feel like being naked sometimes
Posted by Unknown at 2:36 PM

Promote Your Page Too